I went to the dentist a few weeks back, and the hygienist and I had a conversation about our kids. She has a daughter that's about 5 months younger than Cora, so obviously we needed to compare notes. At one point she asked me what Cora was into, and all I could think in reply was, "Everything." (Because that's what people say about toddlers, right?) Two seconds later, as the hygienist was speaking again, I realized it wasn't true. She said her daughter had recently got really into . . . "Books!" I actually finished her sentence for her, even though I'm pretty sure she had her fingers in my mouth.

I told her to not expect that to end. Because it hasn't for us. 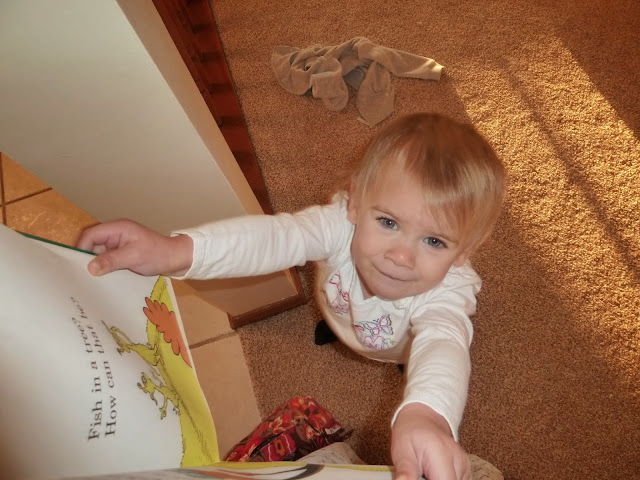 All day long Cora wants me to read to her. It's cute and fun, most of the time. But some other of the time, it's just annoying. "Mama's hands are busy" is an oft-used phrase around here, because sometimes I really cannot drop whatever I'm doing (usually cooking) and read to her. "You read it to me" works sometimes, but not always.

Now that we're in a 2-story house, it's getting difficult because Cora's favorite place to read is the glider in her room, which is now upstairs. We've employed the baby gate to block the stairs a bit, but that's a pain if I need to get up there (it also doesn't fit on our stairs well). Before and after her nap I usually let her play in her room a bit, but really the only toys in there right now are about ten of her books. She doesn't seem to mind one bit.

I think what takes the cake here is on Halloween we were trying to get her out the door to go trick-or-treating, and she straight-up REFUSED to go until Fox In Socks was read to her. I'm a pro at that tongue twister now (Cora now says the word "gooey" because of the "blue goo" page), but Daddy thankfully obliged her this time. Oh yeah, all the books she wants read are at least 30 pages (if not 60)--thanks for nothing, Dr. Seuss! 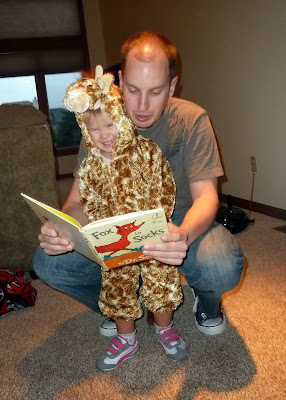 Even though it's annoying, I'm glad my kid is such a voracious reader already! I also love that she can give a 60-pager her full attention for the duration. (That helps her later on, right?) We let her go to bed with books; sometimes I can't tell if she's awake because she's just quietly reading in her crib.

We just need to get back to the library so I can avoid going crazy reading the same books over and over!