I think you can tell how much sleep I have or haven't been getting by how often I post. These past few weeks have been a trial. I have 30 posts in draft mode but none complete enough for me to hit the "publish" button. (Perfectionist's curse?) I haven't slept well because Cora hasn't slept well. I'm basically re-sleep-training her, and that kinda sucks.

But here are some moving and house updates, since that's what's up. 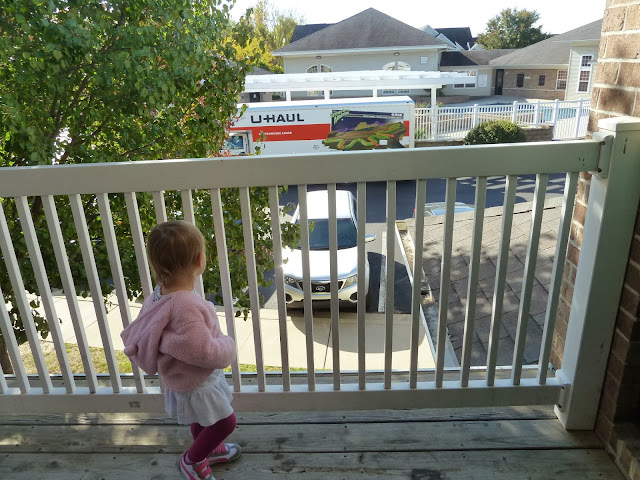 We hired some local college football players to just do the heavy lifting, and B drove the Uhaul.

The whole move took less than 3 hours! Hooray for Big Guys. (No, seriously, that's the name of their company.) 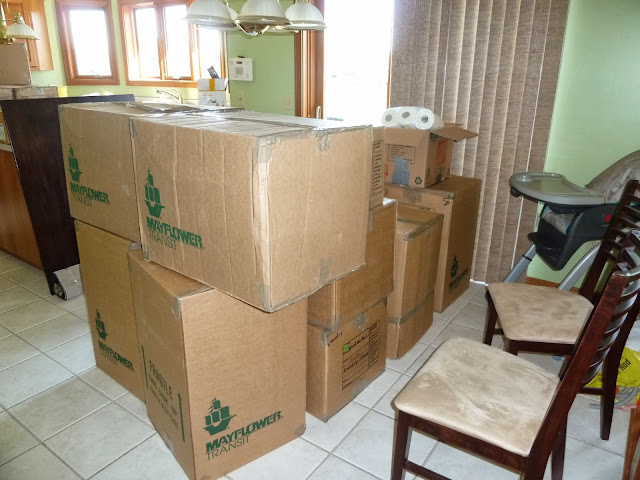 Then it looked like this for almost a week: 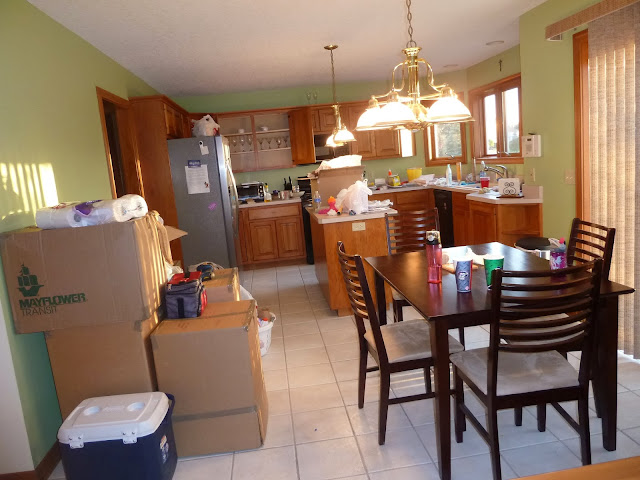 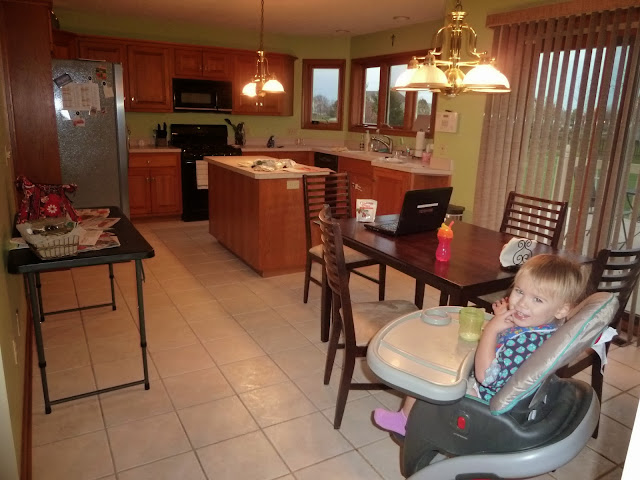 We need to figure out the 'command center' table situation (on the left), since that's actually my sewing table. My in-laws have a skinnier table that is going to go there when they can bring it up. I'm also going to get a bulletin board and some desk organizing things. The island is still a mess and we're still finding 'homes' for stuff. (My purse actually has a new home, as we put some hooks up in the hallway.)

We will be changing out the lighting fixtures soon. I'll have a 'totally finished' after picture one of these days.

We did, however, switch out all the knobs already.
Before picture:
And after:

Now for some other rooms.
As much as I'm still not a fan that our master bedroom faces the street (almost didn't look at this house because of it), I'm in love with the accent wall we did in there. (And by "we," I mean the guy we paid to do it, along with the other tall areas of the house.) 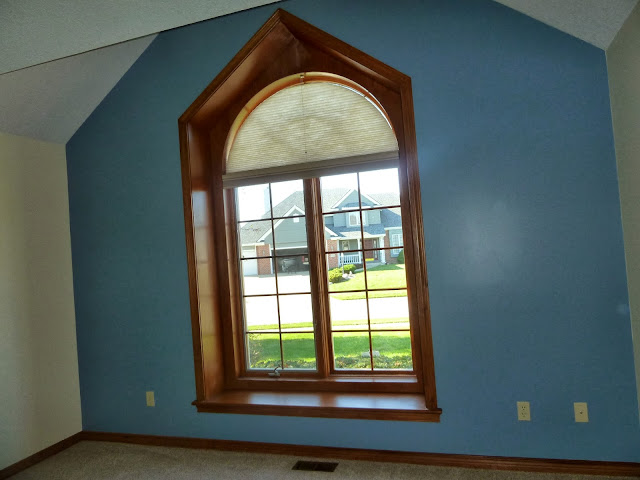 I decided this will also be the color of our dining room, and luckily we had enough leftover paint to do it.

The dining room is the only room in the house trimmed out in white, and it was previously a dark maroonish red. For whatever wacky reason, it was done in a matte paint, and I think it was sprayed on. It was in bad shape, and it definitely needed actual primer and not that combo stuff we used in the other rooms.
The air vent in the top left corner was definitely sprayed, and it is still red behind it. We got a new white one because who paints air vents?? 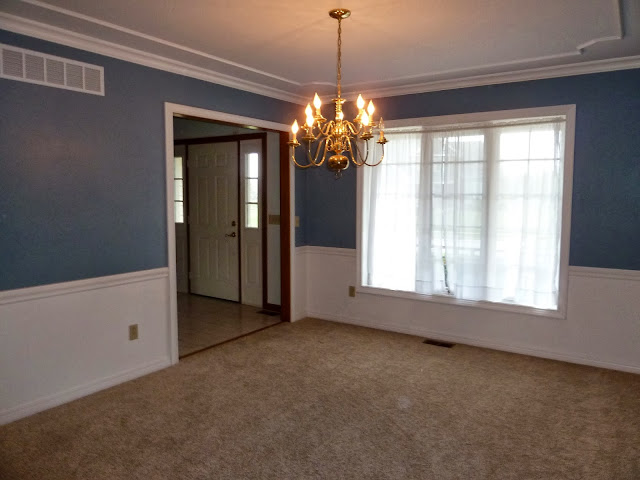 Oh, it also needs furniture, since we have no big dining table or whatever.

Lastly, it turns out that even though there were a gabillion and one cables going into this house, they were all for various satellite dishes and crap we don't want, and none for Comcast cable internet. So they came and laid a cable. It is bright orange and goes diagonally across our whole backyard, into our garage somehow, then up to the attic, and then it somehow does something down in the basement. I don't know; I just live here. They said it would be dug and buried within 2-3 weeks, but it's already been 2 and I think they'll be getting another piece of my mind next week. 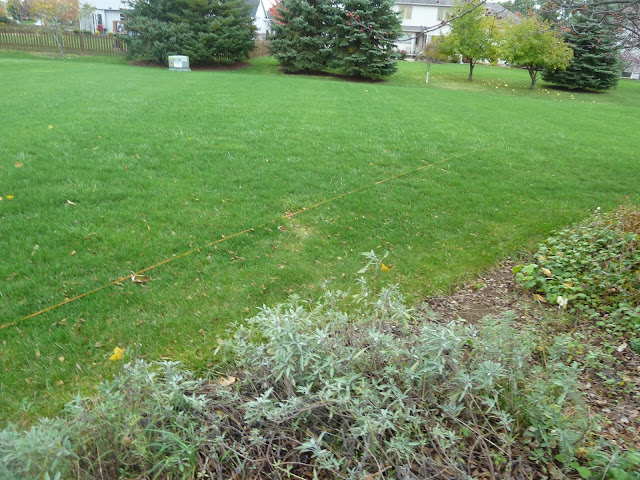 So far, this house is a constant (expensive) project. I want it to just be "done" but that involves buying a lot of furniture and having more offspring or something.

I don't know a good way to end this post so here is a picture of our porch when it a few days ago. I don't think I've witnessed snow this early in the season before, but it is only my second year in Indiana. I have much to learn. 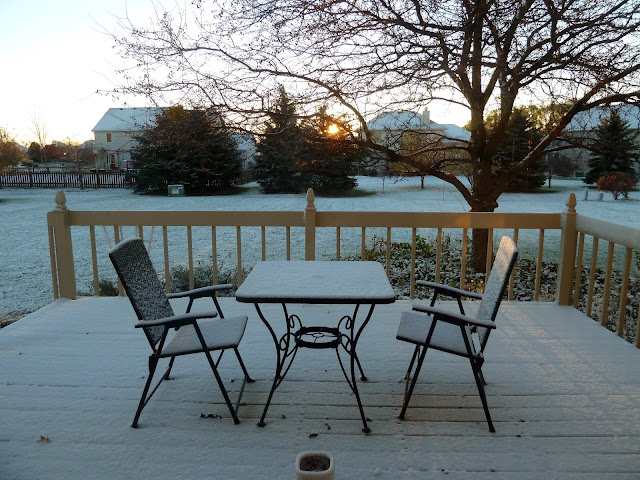 Labels: before and after, house