I haven't really posted about it before, but did you know I have a cat?

I technically don't have him any more, but I still his 'owner,' in a way. I picked him out when I was 9, named him, and he was mine for all the years I lived under my parents' roof.

I still remember going to the pound and picking him. Before then, we had 2 cats named Sampson (called Sammy) and Phantom. These were my mom's cats from when she was single. Dad had to marry both her and the cats, and they were a fixture in our house growing up. They both died within a year of each other in their old age (over 15, each of them). After their passing, we obviously needed some new companions. My mom decided that my sister and I were old enough to each pick out a cat at the pound.

My sister picked out a tiny little black and white tuxedo cat with big paws. She named him Samie, in tribute to our previous black and white cat Sammy (my sister was a terrible speller).

I picked out a cat that was trying to do everything in his power to get out of that cage at the pound. He was jabbing his paw out of the cage and just being very 'frisky' in general. Hence the name I picked for him, Frisky.

Here's a picture of us on our cats' first Thanksgiving:
My sister's tiny little cat with the huge paws turned into a 25 pound part-Maine Coon (we think) chunker.

Frisky fought his way from being an indoor cat to an indoor/outdoor cat by escaping about 20 too many times, and it has been that way ever since. He even got his tail caught in the door once and it became permanently bent at the end.

10 years later, with less ugly sweaters, we got this picture at Thanksgiving:
I believe it was the following year that my sister's cat passed away. It was also possibly during that year, or maybe the one later that my cat needed his back leg amputated. This saved him from having a tumor in his upper leg spread to his midsection, and has luckily given us many many more years with Frisky. 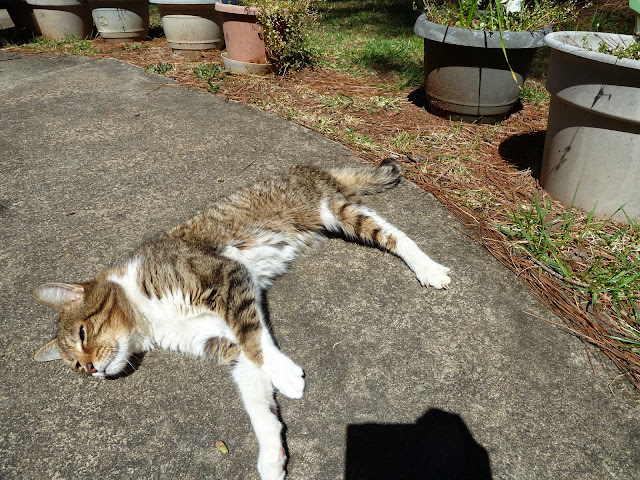 The only thing he couldn't do any more was climb trees.

About a month ago, after coming back from out of town, my parents noticed something off about Frisky. He had broken his leg. His only back leg. Yet he was still limping around, but Mom said he looked pretty pathetic.

I don't think my cat would have done as well as these dogs with wheels for legs. He ended up getting surgery. He's healing. Mom says he's doing alright.

But I'm always thinking in the back of my head about the day I'll get the call. 20 years is almost a centenarian in cat years. I try to give him some extra love every time I go back home (even though he hasn't had a bath in like 2 years), because I never know when it will be the last time. It's been 6 months since my last trip down there, and I'm not sure when the next will be.

As for 20th anniversary version of that picture? Unfortunately, it's won't be happening this year on Nov. 27; the subjects in it now live in 4 different states. But maybe I can make a collage version with my sister (pregnant again!) holding Frisky.
Labels: miscellaneous