waving the green and gold

I love my little 101 list, and a lot of the things on there I really have to work for (a post about my adventures in learning to crochet coming soon). But sometimes one of them just falls into my lap. Last week while B and I visited family in central Florida for the holiday, we were invited to go to the University of South Florida football game, thus fulfilling:

B likes to make fun of me for having stuff on my list that I've already done before, but I put them on there for a reason!  I haven't been to a college football game since I was in college myself, so it's been 6 years.  I've been to a few NFL games since then and was not impressed.  Luckily for me, college football games are just as awesome as I remember, even though I wasn't watching my beloved Dawgs play between the hedges.

I have a lot of USF alumni on my mom's side of the family (including my mother); however, the school didn't have a football team until most of them were well past graduated. My cousin is a more recent grad, and they live about 45 minutes away so they go to a lot of the games.  B and I went with my aunt and my cousin, who have gone to most of the games this season and have their own little game-day rituals.

The game against Louisville was on Friday at 11am, which was . . . odd.  But they got it televised on ESPN2, so that's something.  USF doesn't actually have their own stadium, so they just use the one where the Tampa Bay Buccaneers play.  Parking was super-close to the stadium, but we still got to walk by some fun tailgates.  My aunt and I even got free gigantic t-shirts.  (I normally wouldn't care for an XL, but I had recently seen this tutorial for yoga pants made from a big t-shirt, so I went for it.  Can't wait to make my pants!) 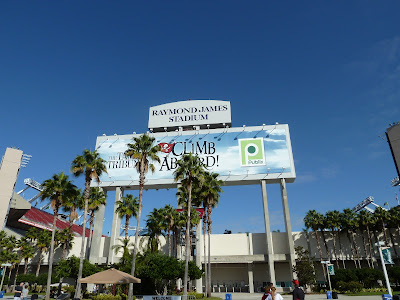 It was a nice stadium, but definitely too big for a team like USF.  I know it was a holiday and all, but there was no one there!  They weren't even selling the upper decks.  B and my cousin bought the tickets at the window and said they were only selling three sections.  The student section was really really empty.  We sorta ended up sitting in the visitors' section, but there weren't that many of them, so it was fine.  And we were in the shade the whole time and the seats were actually cushy!  (I'd never actually sat down during a college game before--at the GA games, we would stand on top of the bleachers--so that was also new, but my swollen pregnant feet were very happy.)  I actually got a bit cold in the shade and ended up wearing my free XL t-shirt, so that was a good call on my part!

The game itself was actually pretty good.  It was back and forth on the score with some fun touchdowns and frustrating fumbles.  In the end, our USF Bulls lost 34-24, pretty much because of their fumbles.  Hey, at least it wasn't a blowout.

My camera battery died before we ever made it in the stadium, so here are some pics from watching the marching band play before we went in. 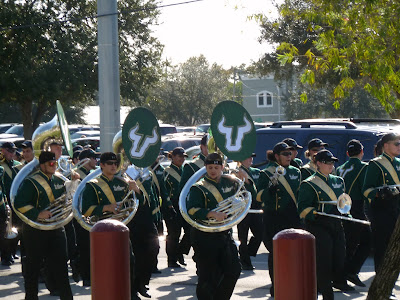