How about some recent highs and lows so you know the low-down? And the high-ups?

High: I have been walking during my lunch breaks most days. The weather has been bee-yoo-ti-fullll here, as we finally got some semblance of summer. I walk around the concourse at our minor league baseball stadium along with all the other sneaker-sporting office workers doing the same. 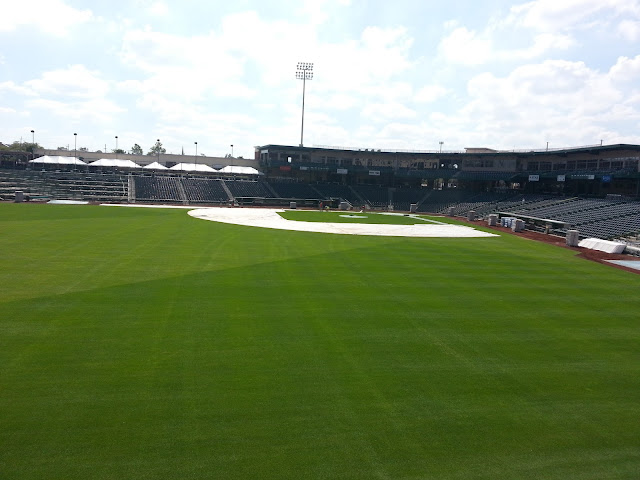 Low: 3-year-olds, amirite? I just can't even with this one. She's going through some definite three-nagerdom right now.
High: Audrey is a dream baby. We moved her to her crib a few weeks back (which is upstairs while our master is downstairs), and it's like it wasn't even a thing to her. She's very close to crawling, and already does a creep-type thing. If I walk away for a few minutes, she's usually not all that close to where I left her. Childproofing may need to be a thing here again soon.
Low: I got suuuuper sick 2 weekends ago. It was a stomach bug thing that lasted about a day and a half (and no, I didn't even miss any work because that's just how I roll it seems). We had to miss out on going to the free day at the art museum. I guess there's always next year...

High: I had my first-ever review at work (I guess it's only annually around here?), and I got a raise! Hooray me. Insert "you like me, you really like me" meme here. There were some also some other long-term goals that my boss seems to be on board with that came up in that meeting. Like, things that could help my work/family balance actually be, well, balanced.

Low: My husband's courseload this semester is rough. We barely see each other because he's studying all the time. I also have to do Thursday nights all on my own since he has class until 9. (The Thursday thing was going to be a low, but those nights are going pretty well.) Our anniversary is next week so hopefully that will be a nice time to actually, y'know, talk to each other. If I wasn't nursing a baby, I was going to suggest a night at an (Amish!) inn about an hour away. Maybe next year. We're going to an indoor trampoline park instead (thanks, Groupon!). And then dinner or such.

High: Hubs got promoted to Lieutenant Commander last weekend! And I finally got to pin it on him (he had been at sea for his previous promotions). Another raise, too. :)

And that's a wrap.