pregnancy update: the stuff that has helped me the most

This past Monday, I hit my 39 week mark!

This was my goal, especially when my doctor told me she'd be out of town last week!  I saw a different doctor last Thursday who could tell that I dropped both by measurements and just by looking.  She did my exam (um, ouch), told me I was 1cm and said she felt the head.  She also could feel me having a contraction just by touching my stomach.  She said I probably wouldn't make it through the weekend.

Well, she was wrong, but that's probably because I didn't do squat other than sit on the couch the whole weekend.  I can only feel my contractions when I stand up, and they don't hurt a lick.  I'm definitely ready now, and I just got the call that my car is fixed so I can turn in the rental.  I might bust out some Dance Dance Revolution tonight just to see if that does anything.

Here's the latest week-by-week look:
Today, I wanted to tell you about some items that have helped me the most throughout this pregnancy.  Most were actually things we already owned.

First up, the ball.
I actually got this for free from doing an online survey.  I had kinda wanted one anyway, but probably wouldn't have ever forked over the $20 for it.  Sometimes the ball is the only place I can get comfortable.  B has gotten some use out of it as well, since it's the same exercise balls they have at the gym.  This one has some sort of bean bag in it though, so it's not constantly rolling across the room.

Now for my "every day around the house items" 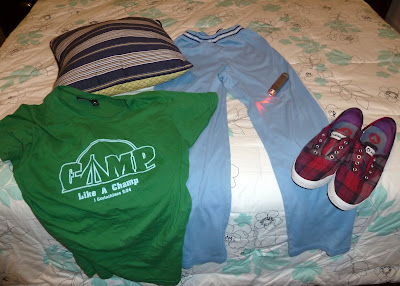 Throw pillow - this was from our guest-room bedding set (formerly B's bachelor bedding).  My chest was hurting (sometimes sorta burning) upon waking some time early in the second trimester.  I found that if I just wedged this pillow under there, I could sleep soundly on my side and not have any pain.

Yoga pants - I've had these forever, but I don't think they had seen very much use until this pregnancy.  Basically, my stupid maternity jeans are always falling down, especially when I stand up and sit down a lot (which I do when I'm at home).  So I just change into these to bum around the house, and they sit below my bump and stay in place.  (I did end up having to take the drawstring out.)  I always change into my jeans when leaving the house, though, because I'm just not that big of a slob.  And when these get dirty, I'll often switch to just regular pajama bottoms.  Elastic waistbands have been much more of a friend than full-panel maternity stuff.

Red flashlight - B used this on the sub.  I use it to go to the bathroom in the middle of the night and not ruin my night vision.  I needed it a bit in the first trimester and these past few weeks.

Shoes without laces - These are still my go-to shoes for pretty much any time I leave the house.  Luckily, I volunteer in a pretty laid-back place, so I can wear these to the office.  I would probably still be wearing flip flops if I was due any other time of year.  I do live in Florida, y'know.

Size-up t-shirts - Seriously, just one size up from my normal size fits me fine.  I only own one shirt in that size (my "Camp Like a Champ" shirt from the summer I worked on a ropes course at a Catholic camp), but luckily B is that size as well.  Also, the blue tank top I'm wearing in all of my belly pics is an Old Navy long and lean tank top in size M (regular, not maternity) that I got right after I took the pregnancy test.  I do obviously own some maternity tops--cute ones that I wear while out and about.  Many were thrifted.  I also found that some of my regular shirts were long enough to continue wearing.  The purple shirt below is a Merona size S from the clearance rack at Target that I've had over a year now, and it still fits fine!

Nursing bras without underwires that don't have cup sizes - these have been great.  My cup size never went up (and I had a weird size to begin with), but the bras I was wearing (all had underwires) were causing a burning sensation underneath my bust.  I tried just using my sports bras for a bit, but they were getting too tight.  The white bra above is my favorite, and I got it at Burlington Coat Factory for $10 while traveling during Thanksgiving (we don't have Burlington here).  Unfortunately, it doesn't have a brand listed on it anywhere!  (It might be Lamaze brand?)  But it does have removable pads in it, and was sized S/M/L with lots of elastic.  That's a M, but it seems with every nursing bra (even some of the same brand), I have to try on every single one.  I went to Target a few weeks back to get some other nursing bras and tanks (used my registry completion discount) and walked out of the store with a tank top in S, a bra in M, and another bra in L.  I have tags still hanging on two of those, just in case I hit a growth spurt when my milk comes in.  The nude bra above came from that trip, and let's just say it has been nice to have options.

Also, see that white thing in the left corner of the picture above?  Yeah, that's a changing pad for baby that I've been taking around with me just in case my water breaks!