Or maybe I should call it Cat and B vs. Delta Airlines?  Our flight out on Wednesday night was delayed for over FOUR hours.  And this being Pensacola (a small regional airport), that means we had a connection that we of course missed.  Delta put us up in a hotel in Atlanta for the night once we got there and re-booked us on the earliest flight to Indy.  Unfortunately, the hotel was not right next to the airport; it was in Jonesboro (for those who know Atlanta), and the midnight shuttle ride there felt like an eternity.  It was packed with people from our flight and also some from Tampa who went through the same ordeal.  My frustration was mostly due to one very drunk middle-aged lady who kept hootin' and hollerin' about being on the "party bus."  I guess she had spent most of her delay at the airport bar.  She immediately went to the hotel's bar once we got there, so at least I didn't have to deal with her any more.

We got a whopping 3 hours of sleep in order to go through the freakin' security at the Atlanta airport and make it to our flight on time.  I also went through the newfangled TSA scanner machine for the first time and mostly by accident (hey, the line was shorter!).  B said I probably shouldn't have done that and used pregnancy as an excuse, but I looked it up later and I'm pretty sure it's fine.  At least we also got vouchers for food, so I ordered the biggest thing on the Burger King breakfast menu . . . then spilled a good deal of it on the floor (next to some guy's foot) when B decided we should move away from the annoying speakers that were constantly blasting CNN.

I will say that our flights this time were much better than when we flew to Texas a few weeks ago.  Something about the tiny planes we were on (Continental for that trip), the stomach issues I was having then, and the short duration of the entire round trip (left on Friday, came back Sunday) did not bode well for me.  My stomach was a miserable wreck for the whole thing, and it was not pleasant.  But this time I did pretty well with the actual plane rides.

As for now, at 16 weeks, I've definitely come out of the first-trimester funk.  I woke up Monday morning and actually felt really good.  As in, good enough to get on the elliptical!  It has definitely taken some outside motivation up until now.  The weather here hasn't helped.  Honestly, if it had actually been decent enough outside, I would have kept up with my running.  But I do like the elliptical--if anything, it's a way for me to see the few shows that I miss on cable.  (This morning I actually planned my workout so I could see "Say Yes to the Dress: Atlanta."  Hey, if that's what it takes . . .)

Now, as for what we did on our mini-vacation to Indiana (and southern Michigan), that's fodder for another day.  But here's a clue: 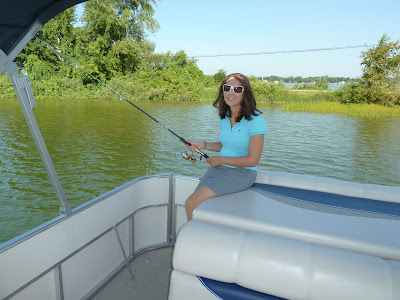