--- 1 ---
I've felt the urge to blog for the past 2 weeks, but after staring at a computer all day at work, I just can't bring myself to type something up. Sigh. I've also been going through some type of sluggish/manic cycle, where I go hours or days too tired to get anything done and then get a wave of energy and knock a bunch of stuff out in the course of a few hours. Is this a pregnancy thing? I'm blaming it, regardless.


--- 2 ---
Speaking of that, I bought some stuff to make some adorable baby headbands and bows that I saw on Pinterest. I'm of course excited to do it . . . I just have to muster up the energy this weekend to bang a few out. Even Cora is excited about this, so I guess I should just suck it up buttercup. (Cora can't really help too much since it's pretty much all hot-glue-gun work.)
I could probably pin cute hairbows and headbands all day long. I never really did like the ones we put on Cora as a baby (the crochet headbands were just too big for her little head).

--- 3 ---
Another 'manic' thing I've been doing when the energy hits is some freezer meal prepping. I had never really done much of this until my book club friends had a freezer meal swap night back in November. We each made 3 of the same dinner and brought it, then went home with 3 different meals. We also talked about strategies and favorite recipes that night. One gal brought copies of her favorite freezer meal recipes (I think they're from a book), and I've been using some of those, along with this Aldi freezer meal plan from the blogosphere.
I'm not sure if these will make it to "new baby" time, but with both of us working, freezer meals really are awesome. B just pulled out the bag of Quesadilla Casserole filling Thursday night (we just assemble it the night of, unlike that recipe I linked), and last night I made a double of the Alfredo sauce from the Aldi plan (one to eat now, one to freeze). We still have enough of the casserole left for at least another dinner.

But then she turned 3 about a month ago. And guess what--someone's picky little tot learned the benefit of 'cause and effect.' I know, I know, I'm not supposed to use sugary foods and desserts to get her to eat her dinner (says all the scientists and child nutrition experts). But goshdarnit, it works!

She also responds to a bribe for her beloved cottage cheese, so all is not lost?

We enjoyed some (fake...microwaved) s'mores for dessert Wednesday night, because I was craving one and she'd eaten all her fish and some veggies. --- 5 ---
My hometown in Georgia got some snow this week, and I have a lot of friends with school-age kids and even more friends (and family members) who are teachers. Everyone was so jazzed about the snow and school cancellations.

Then Thursday, we had a bit of snow here, and I heard the DJ on the radio say, "Yeah, there's some snow, but amazingly no delays or cancellations today." I'm pretty sure every parent in this city breathed a collective sigh of relief that morning, since they cancel/delay school a lot here.

And that's the difference between Georgia and Indiana. (Not saying one is better than the other, although I wouldn't mind just getting a few inches of snow once a year and being giddy about it . . .)

--- 6 ---
So Lent started last week. For accountability's sake, here are my Lenten resolutions: 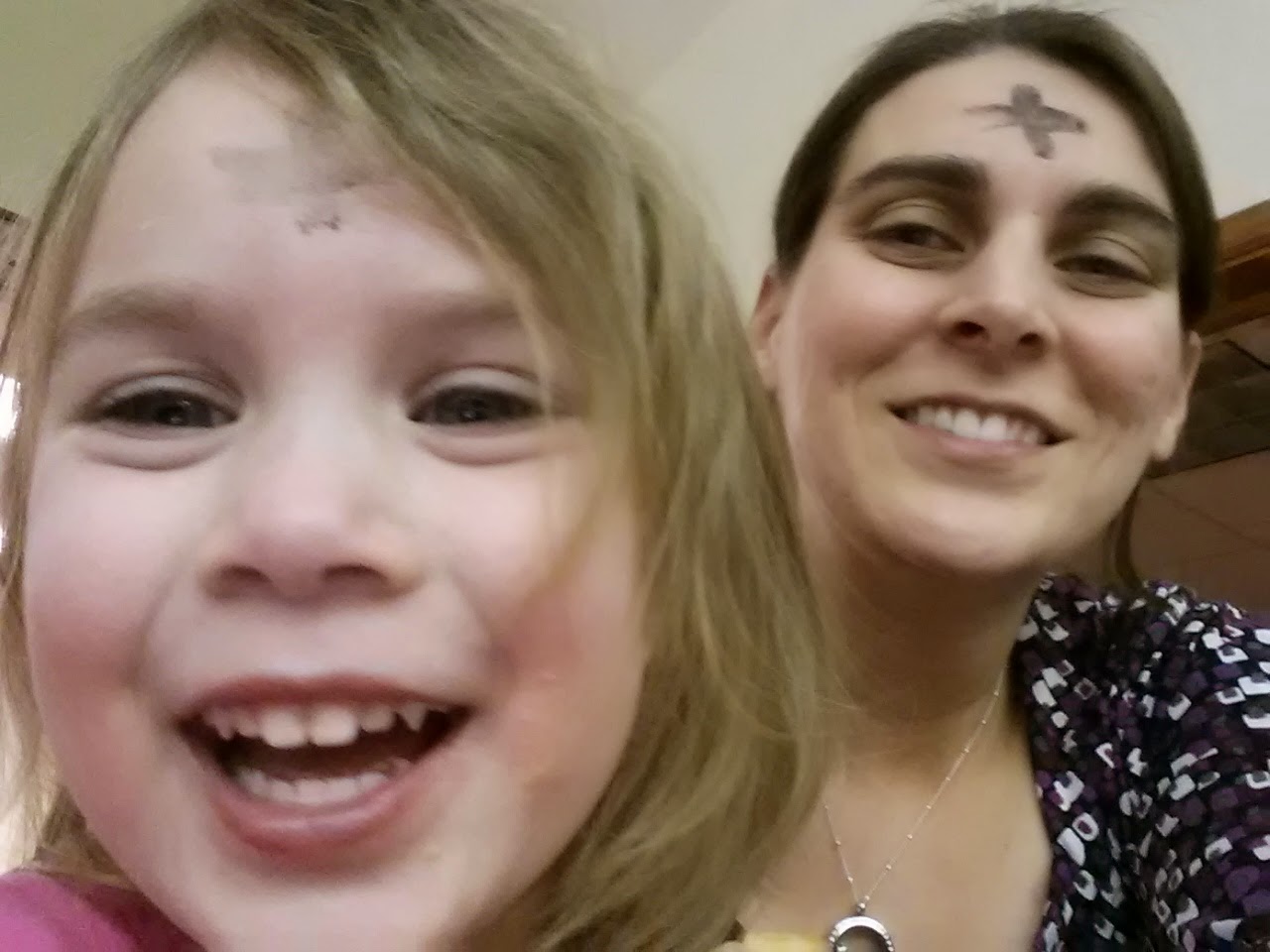 If you want to join the Lenten bandwagon, I found out about this cool website/Twitter account called What to Give Up that gives you a new challenge each day of Lent. I told B he should do it, but not sure if he will.

--- 7 ---
Next week I'm going to hang out with awesome people for a day! I'll be attending a Catholic Women's Blogging Conference on the campus of Notre Dame. I'm probably nuts for doing this at 36 weeks, but oh well. I'm a bit intimidated, since I don't live and breathe blogging, nor have plans to ever make any money from it, but hopefully I'll learn something and chat it up with homegirls like Grace and Bonnie and Sarah. (I've actually had dinner with Sarah before, so I'm excited to see her again!)